Brown blood disease occurs in fish when water contains high nitrite concentrations. Nitrite enters a fish culture system after feed is digested by fish and the excess nitrogen is converted into ammonia, which is then excreted as waste into the water. Total ammonia nitrogen (TAN; NH3 and NH4+) is then converted to nitrite (NO2) that, under normal conditions, is quickly converted to nontoxic nitrate (NO3) by naturally occurring bacteria. Uneaten (wasted) feed and other organic material also break down into ammonia, nitrite, and nitrate in a similar manner. 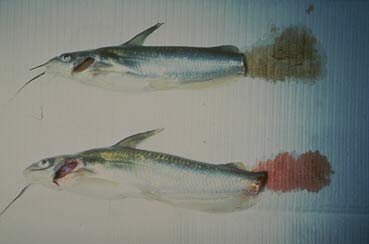 Brown blood disease occurs in fish when water contains high nitrite concentrations. Nitrite enters the bloodstream through the gills and turns the blood to a chocolate-brown color. Hemoglobin, which transports oxygen in the blood, combines with nitrite to form methemoglobin, which is incapable of oxygen transport. Brown blood cannot carry sufficient amounts of oxygen, and affected fish can suffocate despite adequate oxygen concentration in the water. This accounts for the gasping behavior often observed in fish with brown blood disease, even when oxygen levels are relatively high.

Nitrite problems are typically more likely in closed, intensive culture systems due to insufficient, inefficient, or malfunctioning filtration systems. High nitrite concentrations in ponds occur more frequently in the fall and spring when temperatures are fluctuating, resulting in the breakdown of the nitrogen cycle due to decreased plankton and/or bacterial activity. A reduction in plankton activity in ponds (due to lower temperatures, nutrient depletion, cloudy weather, herbicide treatments, etc.) can result in less ammonia assimilated by the algae, thus increasing the load on the nitrifying bacteria. If nitrite levels exceed those that resident bacteria can rapidly convert to nitrate, a buildup of nitrite occurs, and brown blood disease is a risk. Although nitrite is seldom a problem in systems with high water exchange rates or good filtration, systems should be monitored year-round and managed, when necessary, to prevent severe economic loss from brown blood in any fish culture facility.

Largemouth and smallmouth bass, as well as bluegill and green sunfish, are resistant to high nitrite concentrations. The centrarchids apparently are able to effectively prevent nitrite from entering the gills, but most other warmwater fishes grown in the Southeast apparently concentrate nitrite in the blood. Catfish and tilapia, for example, are fairly sensitive to nitrite, and trout and other cool-water fish are sensitive to extremely small amounts of nitrite. Goldfish and fathead minnows fall in between catfish and bass in their susceptibilities to brown blood disease resulting from high nitrite levels. Striped bass and its hybrids appear sensitive to nitrite, but little is known about the relative sensitivity compared to other species.

Since this is a nitrogen-related problem, the most obvious preventive measure is to reduce or minimize the amount of nitrogen incorporated into the system by reducing feeding rates. However, in modern intensive pond or closed-system fish culture with high densities and rapid growout, long-term feed reduction is not considered by most farmers as a viable option. Luckily, although the occurrence of high nitrite often cannot be prevented, its effects can be minimized or neutralized safely and economically.

Sodium chloride (common salt; NaCl) is used to "treat" brown blood disease. Calcium chloride also can be used but is typically more expensive. The chloride portion of salt competes with nitrite for absorption through the gills. Maintaining at least a 10 to 1 ratio of chloride to nitrite in a pond effectively prevents nitrite from entering catfish. Where catfish (or other fish) have bacterial and/or parasite diseases, their sensitivity to nitrite may be greater, and a higher chloride to nitrite ratio may be needed to afford added protection from nitrite invasion into the bloodstream. As a general rule, catfish producers strive to maintain at least to 50 to 100 ppm chloride in pond waters as "insurance" against high spikes of nitrite concentration. It is likely a good idea for culturists of other species to assume that nitrite is a potential problem and use salt as an insurance buffer as well.


How To Calculate Amount of Salt Needed

Before treatment rates can be calculated, chloride and nitrite concentrations in the water, as well as pond or tank volume, must be determined. Commercially available water quality test kits can be used. Contact your Extension fisheries or aquaculture specialist for assistance in locating sources for test kits and conducting and interpreting these tests.

The amount of salt needed for the pond can be calculated using the following formulas:

The number "10" used in this formula is the minimum desired chloride:nitrite ratio number. It is used here to get a 10 to 1 chloride to nitrite ratio. If a higher ratio is desired, substitute the 10 with the higher number.

If the answer is zero or a negative number, chloride concentration is sufficient to prevent brown blood disease.

Use the answer from Formula 1 above in the following formula:

4.5 pounds of salt are needed to increase the chloride concentration by 1 ppm in an acre-foot of water.

The following readings are obtained from a 20-acre catfish pond with an average depth of 4 feet:

Distribute the salt evenly and quickly when fish are suffering from brown blood disease. Farmers have used feed trucks, airplanes, paddle wheels, and front-end loaders to distribute salt. It takes about 24 hours after salt is applied to a pond for the brown blood condition to be alleviated.

A good water quality monitoring program can help prevent brown blood disease. Pond water should be checked for nitrite 2 to 3 times a week during fall and spring and at least weekly the remainder of the year. Specialists recommend maintaining a chloride to nitrite ratio of at least 10:1. Check ponds daily during a known high nitrite incident, even if adequate chlorides are in the ponds. Also, check chloride after periods of heavy rain or active flushing from well water; both these events can dilute chloride concentrations and reduce the chloride:nitrite ratio.

Nitrite can increase suddenly, so it is advisable to keep a 25 to 50 ppm chloride concentration at all times to act as a buffer when nitrite suddenly increases. This is a standard practice in the catfish industry, and incidents of brown blood disease in catfish ponds have become rare. As an example, if your water has a chloride concentration of 4 ppm and you want to increase it to 25 ppm, add 21 ppm chloride to your pond: use Formula 2 to calculate the pounds of salt needed.

Another way to help prevent brown blood disease is by checking total ammonia nitrogen (TAN) concentrations in ponds every week. Every 1 ppm TAN can convert to 3 ppm nitrite in a relatively short period. High TAN levels can alert the farmer to anticipate nitrite problems within a few days, and nitrite problems can thus be predicted and then prevented.

In many areas, water contains high natural concentrations of chloride, and addition of salt as "insurance" is not needed. Water should still be monitored frequently, however, since chloride levels can fluctuate widely and frequently.

Brown blood disease can be prevented, or at least minimized, by close monitoring of nitrite, chloride, and TAN, and by maintaining the proper chloride to nitrite ratio. If brown blood disease does occur, the condition can be reversed by adding salt to the water. Catfish (and likely other fish) surviving brown blood disease or nitrite stress are more susceptible to bacterial infections, anemia (white-lip or no-blood), and other stress-related diseases. These secondary problems, such as Aeromonas or Columnaris infections, often occur 1 to 3 weeks after brown blood disease occurs.

Research is currently underway to determine whether even higher levels of chloride may be beneficial in reducing sublethal, chronic stress on fish from nitrite or other stressing factors.