The "red" tilapia has become increasingly popular because its similar appearance to the marine red snapper gives it higher market value. The original red tilapias were genetic mutants. The first red tilapia produced in Taiwan in the late 1960s, was a cross between a mutant redish-orange female Mozambique tilapia and a normal male Nile tilapia. It was called the Taiwanese red tilapia. Another red strain of tilapia was developed in Florida in the 1970s by crossing a normal coloured female Zanzibar tilapia with a red-gold Mozambique tilapia. A third strain of red tilapia was developed in Israel from a mutant pink Nile tilapia crossed with wild Blue tilapia (Popma and Masser, 1999). 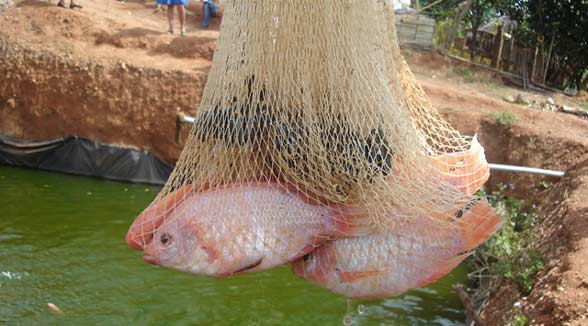 Jauncey and Ross (1982) found that optimum dietary protein level for fish was affected by balance between dietary protein and energy, amino acid composition, digestibility of dietary protein, the physiological status of the fish and the level of food intake.

Fish require energy for growth, activity and reproduction. The rate of energy utilization is called metabolic rate. Factors affecting the metabolic rate in fish are temperature, species, age or body size, activity, physical condition, body functions and water chemistry parameters such as oxygen or carbon dioxide saturation, pH and salinity (Wilson 1977). Providing the exact amount of energy in the diet of fish is important, because if the useful energy is too high the consumption of protein and other nutrients may be restricted and growth is retarded. Furthermore excess of energy may produce fatty fish. This can be undesirable especially if it reduces the dress-out yield and decrease the durability of the frozen fish (Lovell, 1989).

On the other hand, when the diet is deficient in energy, dietary protein will be used as an energy source (Cowey, 1980). The more protein is used for energy, the more ammonia is produced, and the more energy is lost as heat (Cho and Kaushik, 1985), consequently, less protein will be retained in the fish body. Therefore, the proper balance between dietary protein and energy is therefore essential in fish feed formulation. The aim of the present investigation is to find the optimum protein and energy (P/E ratio) required for the best growth performance, feed utilization, and proximate analysis of red tilapia fry and fingerlings.

The present study was carried out at the Laboratory of Fish Nutrition, Faculty of Agriculture Banha University.

Red tilapia fry and fingerlings were obtained from a finfish hatchery owned by GAFRD at Abu Telaat, west Alexandria. Fish were adapted for two months by gradually decreasing water salinity and finally reared in fresh water.

Moisture, dry matter (DM), ether extract (EE), crude protein (CP), crude fiber (CF) and ash contents of diets and fish were determined according to the methods described in AOAC (1990): dry matter after drying in an oven at 105°C until constant weight; ash content by incineration in a muffle furnace at 600°C for 12 hrs; crude protein (N×6.25) by the Kjeldhal method after acid digestion; and ether extract by petroleum ether (60-80°C) extraction.

At the end of the experiment, three fish were randomly taken from each aquarium (9 fish for each treatment) and exposed to the chemical composition of whole fish body according to the methods of AOAC (1990).

The statistical analysis of data was carried out by applying the computer program, SAS (1996).

Al-Hafedh (1999) found that, SGR of Nile tilapia was significantly increased as diet protein level increased from 25-45% (with increment of 5%). Also, Ogunji and Wirth (2000) with the same fish specie found that, SGR increased with increasing dietary protein level from 7.3 to 44.24%. On the other hand, Clark et al., (1990) found that SGR of Florida red tilapia did not differ significantly when fish fed diets contained 20, 25 or 30% crude protein.

Concerning the effect of dietary energy level on average BW, BL, WG and SGRTables 2 and 3 show that, BW, BL, WG and SGR of red tilapia fry and fingerlingssignificantly increased with increasing dietary energy level from 2400 to 2800 and 3200 kcal ME/Kg. These results indicated that, energy requirements for red tilapia fry and fingerlings reared in tanks must be above 3000 kcal/kg diet, excess energy may produce fatty fish, reduce feed consumption (reducing total protein intake) and inhibit proper utilization of other feedstuffs. Therefore, it is critical to obtain the proper protein to energy (P/E) ratio in a diet for the most economical production of tilapia (Shiau and Haung,1990).

With regard to the effect of dietary energy content, results presented in Tables (4 and 5) indicated that, increasing energy content in tilapia diets significantly increased FI and this subsequently followed by increase in all growth parameters such as BW, BL, SGR and WG of red tilapia fry and fingerlings. El-Dahhar and Lovell (1995) described that excess energy in tilapia diets may reduce feed consumption. Our results support those of Winfree and Stickney (1981) and Jauncey (1982) in that tilapia regulate their food consumption according to energy intake.

As described in Tables (4 and 5), averages PER were significantly different and being 1.79, 1.70 and 1.98 for red tilapia fry and being 1.81, 1.67 and 1.83 for fingerlings fed the diets contained 25, 30 and 35% crude protein, respectively. Results of PER indicated that, increasing dietary protein significantly increased PER for red tilapia (Table 4) while PER had no clear trend in fingerlings. Abdelhamied et al., (1997) and Twibell and Brown (1998) found that, PER was unaffected by increasing dietary protein from 25 to 35% for O. niloticus. On the other hand, Siddiqui et al., (1988) found that, PER decreased with increasing diet protein level from 20 to 50% for Nile tilapia. Also, El-Ebiary (1994) found that, increasing dietary protein level up to 35% and feeding rate up to 4% decreased the values of nutrients (protein and energy) utilization in Nile tilapia and its hybrid.

As shown in Table (6) moisture content of fry at the end of the first experiment ranged between 70.88 and 72.99% and the differences between these percentages were not significant. It is observed also that, increasing dietary protein level from 25 to 30 and 35% significantly decreased protein contents in whole fry bodies from 54.65 to 51.99 and 48.12, and significantly increased fat content from 30.24 to 30.84 and 35.53% (Table 6) and the same trend was also observed for red tilapia fingerlings where increasing dietary protein significantly increased protein and decreased fat content of red tilapia fingerlings (Table 7).

In general, fish fed the high protein diet gained the highest crude lipid content in their bodies which can only be explained by an imbalance in the diet. Similar results were obtained by Abdel-Hakim et al., (2001) who found that, increasing dietary protein level from 25 to 30% decreased the percentages of protein from 55.58 to 52.24%. Also, Al-Hafedh (1999) found no significant influence of dietary protein level (25 to 45%) on body protein content of Nile tilapia but the lipid content decreased with increasing protein level and no clear trends in ash content were observed.

As described in Table (6) it is observed that increasing dietary energy content from 2400 to 2800 and 3200 kcal ME/kg diet significantly decreased protein and ash but increased fact content of red tilapia fry fed the experimental diets for 8 weeks and the same trend were also obtained for tilapia fingerlings fed the same experimental diets for 10 weeks (Table, 7) and these results were supported by Buckely and Groves (1979), Shiau and Huang (1990) and Soltan et al., (2002). They found that, body lipid increased as dietary energy increased while the moisture, protein and ash contents decreased. Similar results were also reported with Mozambique tilapia (El-Dahhar and Lovell, 1995).

It could be concluded that diet containing 35% crude protein and 3200 kcal ME/kg (P/E ratio of 110.3 mg protein/kcal) considered the most suitable diet for red tilapia fry and fingerlings reared in tanks.