Thailand has long been regarded as the pioneer in the rearing of larval marine fish in the South East Asian region, particularly with the Sea Bass, Lates calcarifer. Artificial propagation was successfully demonstrated by Wongsomnuk and Maneewongsa (1972). Since then, the industry has grown in Thailand with many hatcheries scattered along its eastern seaboard, particularly in Chachoengsao, Chonburi and Rayong. Current production estimates are around 800 million 1-inch fry/annum, many of which are exported to Malaysia, Taiwan and more recently Vietnam for further grow out in cages and ponds.

In general, hatchery survivals are fairly low when compared to those of their European counterparts. Hatcheries tend to be smaller and are less capital intensive, with labour being mainly non-technical. General hatchery standards of hygiene tend to be lower and the level of technical expertise with respect to larval nutrition and health is sparse. However,  despite rampant low overall survival rates, the industry is still a highly profitable one. Similar with so many other aquaculture sectors, small changes in routine and product utilization can yield significant differences in survival and growth benefits.

Manipulation of health and nutrition

The simplest area to manipulate and improve upon in terms of fish larval health and nutrition is in the field of bio-encapsulation using first rotifers then Artemia nauplii.

Traditional enrichment methods involve concentration of the living food organism in a suspension of nutrients such as essential fatty acids(EFAs) and/or vitamins. As these two food organisms are filter feeders, they concentrate these nutrients within their tissues. After harvesting, they are fed to fish larvae which benefit from the enhanced nutrient profiles.

There are, however, disadvantages clearly associated with this process. In the case or rotifers exposed to 12 hour enrichment at recommended dosages, high rotifer mortalities are commonplace. Reducing product density reduces product uptake by the target animal and only reduces rotifer mortality rate. This mortality is clearly seen as an accumulation of foam on the surface of the enrichment vessel. Furthermore, microscopic examination of the rotifers after 12 hour enrichment reveals the rotifers to be very sluggish in their rates of movement compared to non enriched rotifers and this may well result in further rotifer mortality in the fish larval rearing tanks.

In the case of Artemia, the disadvantages may well be considered greater. With 12 hour enrichment times from Instar 2, the nauplius grows rapidly and may well become too large and fast moving for the intended predator fish. Again, there can be naupliar mortality in the enrichment vessel and a concomitant increase in the risk of disease transmission from dead or dying nauplii.

With new enrichment techniques optimising filter feeding particle uptake, the time element can be reduced to a mere 1-2 hours. This leads to reduced labour inputs and easier scheduling of hatching and feeding operations. The nutritional quality of the prey organism is extremely high. In the case of rotifers there is no significant mortality in the enrichment vessel and the prey organism mobility remains high and in the case of nauplius, growth is limited, therefore the nauplius remains small. Fish larvae therefore find it much easier to capture smaller prey moving within their reactive perceptive fields (RPF) of vision. The risk of contamination is considerably reduced in such a practice.

In summary the short time enrichment process is less work for the hatchery operator and increases nutritional quality for the fish larvae. 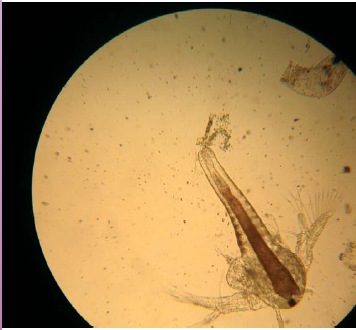 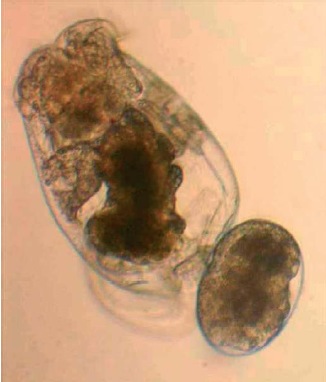 What should be used as enrichment materials?

Traditionally this has been heavily skewed in favour of EFAs and vitamins. It is now possible to manipulate individual EFAs depending on the requirement of particular species or particular life stages of a species. As examples, some cultured organisms require EPA whilst others require higher levels of docosahexanenoic acid (DHA) or arachidonic acid (ARA); these can all be controlled and manipulated for the benefit of the target fish/shrimp. Short term enrichment can, however, be applied to a much wider spectrum of nutrients such as proteins and minerals.

In terms of health, it has always been accepted that vaccination is out of the question, although recent work by Shoemaker and Klesius (2005) has shown that immune cells do exist and function in catfish fry as young as 10 days old. There are lessons to be learnt from studying immunity in higher vertebrates and extrapolating these to fish larvae. One such area is passive immunity. It is possible to prepare micro-encapsulated suspensions of natural immune products and concentrate them in rotifers and Artemia nauplii. Such products have been shown to significantly enhance larval fish survival in recent trials in Thailand, Malaysia and Vietnam.

In the critical early days of larval development, these tools will be of great benefit in the future. 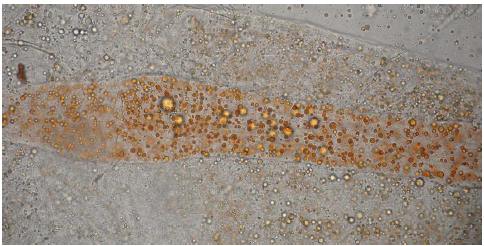 As in other situations, cheap does not often mean good. To rear the best quality fry one must use high quality feeds. What looks good to the operator e.g. in terms of colour, may not mean anything to the fish, which most likely sees in shades of grey. By the same token, what feed smells good to the operator may not smell good to the fish.  Acceptability and palatability go hand in hand but may not necessarily be enhanced by the same compounds. A good illustration of this was observed in a large sea bass hatchery in Thailand. Fish had been weaned onto one commercial feed and then were offered Skretting Gemma feed as an alternative. There were no problems in acceptability or palatability. The same could not be said vice versa.

Recently trials were run in Thailand rearing larval sea bass from first feeding on a combined health and nutrition strategy developed by the respective companies of the authors. The chosen hatchery was Talaythai hatchery in Ang Sila, Chonburi and involved four million hatch fry.

Monitoring of the trial was done by representatives of both companies and by a team of aquatic veterinarians under the direction of Associate Professor Nantarika Chansue of the Aquatic Veterinary Medicine Department of Chulalongkorn University.

Both rotifers and Artemia nauplii were enhanced nutritionally and boosted with a variety of natural health components in a micro-encapsulated form (Picture 1 & 2). This test was conducted against a conventional enrichment process. This process was implemented for a 20 day period following initiation of first feeding. Stocking densities were 40 larvae/litre and rotifer density was maintained initially at 20/ml. Feeding of enriched Artemia nauplii was initiated at Day 12 with an initial density of 1/ml. Daily feeding began with twice a day and by Day 14 it was increased to 7 times/day, beginning at 6am every 2 hours until 6 pm. Weaning using a conventional feed against a Skretting Gemma feed regime was initiated at Day 15 until the end of the test.

Results showed a large difference in survival (80% against 30%) which is almost certainly due in the first instance to the natural enhancement of the larval immune system (Figure 1). No antibiotics or probiotics were used in the course of this trial. Therefore their influence could be negated. The influence of improved quality feed became increasingly evident as the trial progressed, and therefore feed built on the advantage provided by improved health.

Animal size in the test group was considerably bigger (Figure 2). This was observed as early as Day 2 by Prof. Chansue and her team. The team noted the larvae were longer and deeper bodied (Figure 3), and that cranial diameter was larger in test fish; of most interest to the team were the obvious differences in dentition in the 2 groups of early larvae, with test larval dentition being more advanced than in controls (Figure 4). 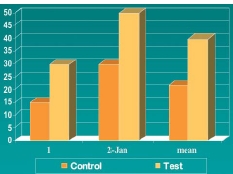 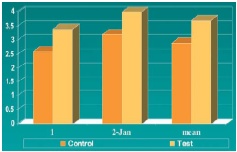 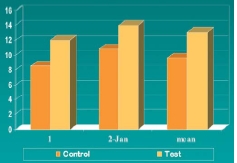 Since carrying out this initial trial, 2 repeat trials have been conducted at the same hatchery with similar results. In more recent trials with red snapper and tiger grouper in Malaysia the same system has been shown to produce excellent survival and growth in the test larvae. The same is true for larvae of the cobia and orange spotted grouper reared in trials in Vietnam.

The overall intention is for the two companies to apply this joint health and nutrition package to hatcheries in every country throughout the region. A similar program for shrimp larvae is in the pipeline. 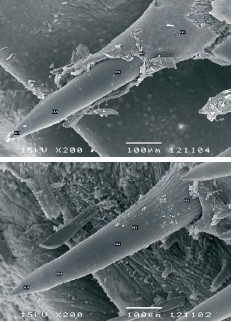 Advanced dentition in test group (below) as compared to control group (above) (Photo 3).