With increases in production come increases in risk of loss, particularly from diseases.  The most significant disease causing losses in Tilapia culture is Streptococcosis. Streptococcal diseases of fish are becoming more common and when they do occur, significant losses can result. Some aquatic Streptococcal species may cause disease in humans in unusual circumstances. They do not usually affect healthy people.

In addition to bacteria in the genus Streptococcus, there are several other closely related groups of bacteria that can cause similar disease, including Lactococcus, Enterococcus, and Vagococcus. Streptococcal infections in fish can cause high mortality rates up to 75% over a period of 3 to 7 days. Some outbreaks, however, are more chronic in nature and mortalities may extend over a period of several weeks, with only a few fish dying each day.

A typical history suggesting that Streptococcus may be the cause of disease in a group of fish might include reports of abnormal swimming behaviour, often described as spiraling or spinning. Any time fish are observed behaving in an unusual manner, Streptococci should be considered as one of the possible causes; however, not all infected fish show abnormal behaviour.

Affected fish may exhibit one or more of the following clinical signs, depending upon the species: erratic swimming (such as spiraling or spinning); loss of buoyancy control; lethargy; darkening; uni- or bilateral exophthalmia ('pop-eye' in one or both eyes); corneal opacity (whitish eyes); haemorrhages in or around the eye, the gill plate, base of the fins, vent/anus, over the heart or elsewhere on the body; ascites (dropsy/bloating) and ulcerations. In some cases, the fish may show no obvious signs before death. Of the signs listed above, haemorrhage, pop-eye, spinning, and rapidly progressing mortalities are among the most frequent observations.

Most recently, Streptococcus agalactiae has become an important pathogen of tilapia in Asia and the Americas (Klesius et al., 2005). It is this pathogen that is responsible for much of the mortality in Thai tilapia culture in recent years (Tan et al., 2007). According to Maisak et al., (2008), of 60 isolates from infected tilapia from different areas of Thailand, 53 were S. agalactiae (88%) and only 7 (12%) were S. iniae. Some symptoms appear different from those in S. iniae infections, in particular the presence of blisters/abcesses on the jaw (Plate 1) and on the caudal area (Plate 2), whilst others are extremely similar eg, melanisation of the skin (Plate 3) and lesions of the skin (Plate 4).

The taxonomy of the genus Streptococcus is complex and one of the results of this complexity is that a vaccine for S. iniae may not prove efficacious in the prevention of S. agalactiae infection. This has been clearly demonstrated by Evans et al., (2005); there appears to be very little or even no cross-protection between these species. 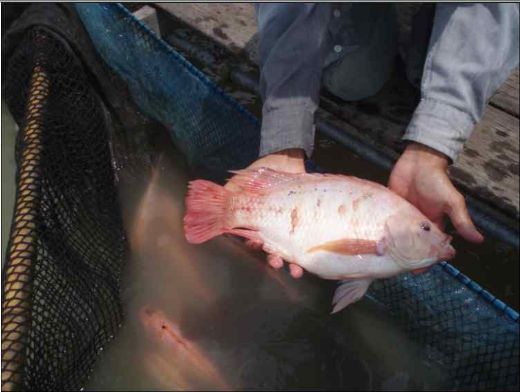 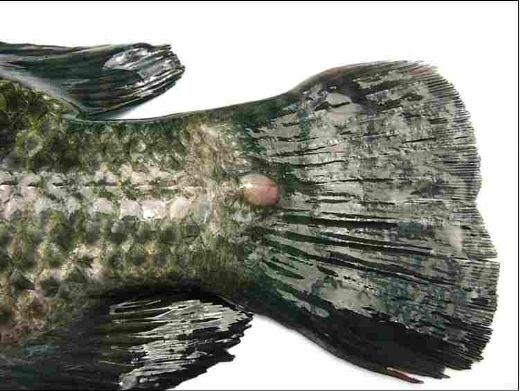 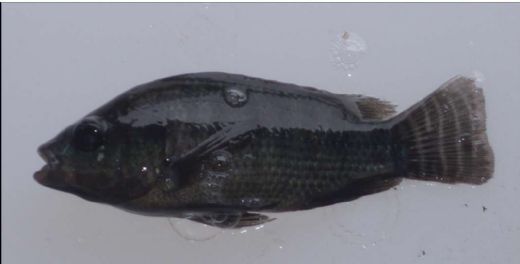 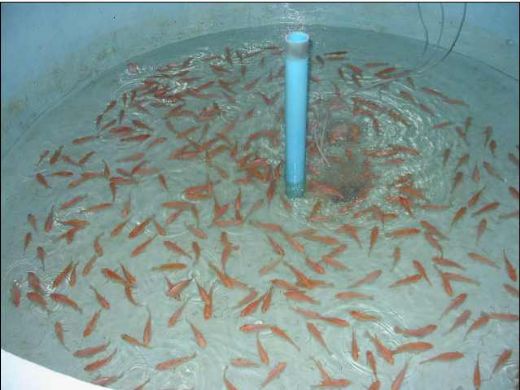 In the present series of studies, an injectable vaccine was developed for the protection of tilapia against S. agalactiae infection in Thailand. Its safety and efficacy were established during this study and the commercial implications of having such a vaccine available for use are discussed.

In a series of laboratory scale trials, the holding facility used is described in the diagram. Water from a supply canal is first pumped into a settlement tank. After settlement, the water is passed through a series of four sand filters to remove particulate material into a reservoir tank. Water is treated with chlorine to eradicate any potential pathogens from the culture water. Residual chlorine is removed using strong aeration. Water can then be used to supply the fish holding tanks.

Water is also supplied to the challenge facility (Plate 5) which contains 12 net cages each. These net cages hold the replicates for each treatment. During the safety component of the experiment, water is allowed to flow through the system, but during the challenge phase, the water exchange was terminated and challenge water was passed to the sterilising tank.  Prior to discharge of the water, a chlorine treatment was applied. This ensured there was no discharge of potential pathogens into the environment. 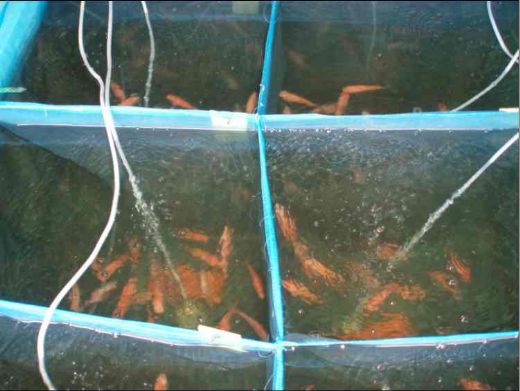 Three trial groups were used. These were control (untreated, positive control (injected with saline) and test (injected with vaccine). There were three replicates for each group holding 20 fish each.

In the first phase of the trials, fish used in the experiment were of 2 strains; Thai Red and GIFT. The average body weight of the test fish was 20g. At termination of the experiment, red fish weighed 30g.  Fish were fed daily at 1% of body weight and any moribunds or mortalities were removed for examination.

In the second phase of the trials, fish used in the experiment were of the following strains; Genomar, Chitralada, Nam Sai, Thai Red and GIFT. The average body weight of the test fish was 20g. At termination of the experiment, fish weighed 30g.  Fish were fed daily at 1% of body weight and any moribunds or mortalities were removed for examination.

The vaccine was a sterile, formalin killed adjuvanted vaccine containing two strains of S.  agalactiae. Cell density of each strain within the vaccine was 5x 1011cells/ml. The two strains used were isolated from moribund tilapia sourced from 2 locations in Thailand; Nakhon Pathom and Prachinburi. The vaccine was stored at 2ºC under refrigeration until required.

Safety studies were conducted over 56 days. Controls were not injected, but a positive control was present which was injected with 0.1ml of saline solution. The vaccine group was injected with 0.1ml of vaccine applied intra-peritoneally (Plate 6) by a Kaycee multi-jector after anaesthetization of the fish. At the start of the experiment fish were first sedated using 0.1g/l Phenoxyethanol. Fish are then returned to their respective tanks.

At the start of the challenge period, all surviving fish were injected with 0.2ml of pathogen in Tryptic Soy Broth. 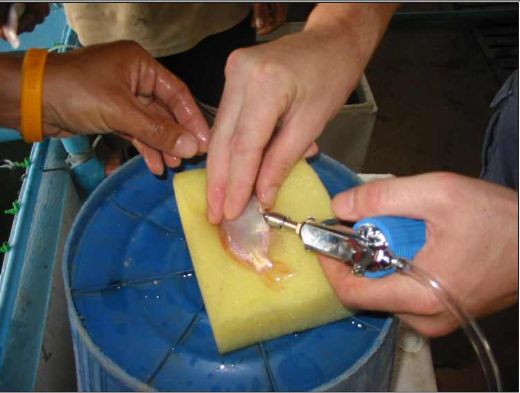 After the 56 day safety study, surviving fish in all treatments were anaesthetised with phenoxyethanol, then fish were challenged by intra-peritoneal injection of live pathogen (0.2ml of 1.3x109 CFU/ml); this dose was considered optimal for this size of fish in previous research by Janenuj (pers.comm.) The pathogen was isolated from moribund tilapia from a farm in Prachinburi by the Aquatic Animal Health Research Institute in Kasetsart University, Bangkok, Thailand. Pathogen identification was carried out using API Strep from the same institute

The pathogen challenge solution was prepared in Tryptic Soy Broth and contained 1.3 x 109 Colony Forming Units/ ml broth (prepared by IQA LAB, Bangkok, Thailand. Mortalities were monitored daily and recorded, and the appearance of symptoms was similarly recorded. The experiment was terminated 14 days after challenge. Actual survivals were calculated along with RPS values. The pathogen was re-isolated from moribund fish and compared with the challenge organism using API Strep at AAHRI, Kasetsart University, Thailand.

In 6 separate trials this tri-valent S. iniae vaccine proved to be extremely safe 56 days post-injection, with survival values ranging from 97% to 100% (Figures 1 and 2). Safety by intra-peritoneal injection route could therefore be considered safe (Clark et al., 2009a, 2009b and 2009c, in press)

Again, in 6 separate challenge trials using a high dose of live pathogen isolated from infected tilapia  Oreochromis niloticus (1x109 CFU/ml), survival rates of vaccinated fish, both single and double treated doses, were high. Typical safety data is shown in Figures 3 and 4. RPS values were high in both experiments (Figures 5 and 6) but from Figure 7 it is noteworthy that in fish of the same size injected with the same dose of the same pathogen, RPS values are variable. It was obvious from this data that different strains of tilapia displayed different susceptibility characteristics towards S. agalactiae infections. RPS Values for the vaccine ranged from a low of 41 to a high of 71 depending on the severity of the infection and the strain of tilapia.

Vaccination of fish species in Asia will become the industry norm in the not too distant future. In many ways it will mirror events in the salmonid industry some 20 years ago. Whilst high value marine species such as grouper merit attention in terms of vaccine development (Clark and Chansue, 2009d), so too do more commonly cultured lower value species such as tilapia and catfish.

In these preliminary studies carried out over a 2 year period, it can be seen that Streptococcosis in tilapia can be controlled via injection vaccination. RPS values can be high although they are masked to some degree by genetic variability. Re-infection studies using a re-isolate produced the same symptoms in infected fish (Plate 7), and in a more recent trial in brood stock cages, the injection vaccinated fish exhibited survivals of 65% 6 months post-vaccination compared to 49%  in the Control. This vaccine is still being improved but has already demonstrated significant cost-effectiveness to the farmer.

While some may question labour costs, fish stress etc. as barriers to injection vaccine use, other forms of this vaccine are being tested. An immersion form is under test, although thus far it is not as successful as the injectable route. Immersion RPS values tend to produce RPS values 2x lower than injectable forms (Evans et al., 2004), and this in part could be due to low antibody response values in fish serum compared to those in mucous in injection vaccinated fish (Delamare-Deboutteville et al., 2006).

Oral vaccination is considered the optimal vaccine delivery system but this too is problematic, particularly in terms of an optimal vaccine delivery system. As seen in one commercial trial with the tilapia, however, an oral vaccine form has produced a similar survival result after 6 months of cage culture to an injectable form, around 69% being achieved. This experiment is in need of repetition to ensure consistency, but there are strong grounds for optimism in this case. 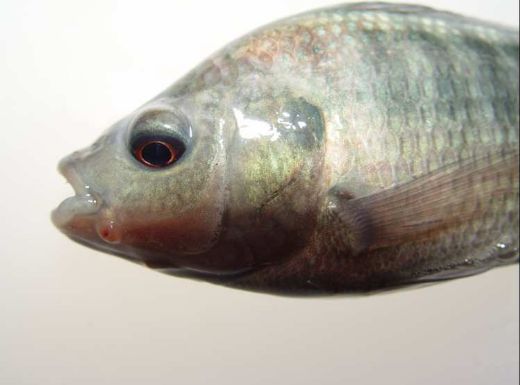 However, whilst vaccination may well be a prime tool in prevention of disease, it should not be viewed as a panacea for all illnesses. Numerous other tools are available to help prevent disease and disease vectors.

Finally one should consider why pathogens such as Streptococcus agalactiae have become problematic wherever tilapia is cultured. There are large movements of fish between countries and it should not be surprising that pathogens move with the fish. If a large ecto-parasite such as the skin fluke Benedenia can be moved from country to country via marine fish fry, something as small as Streptococcus can be moved too. This is particularly true in the case of Streptococcus as it can "hide" within white blood cells of the fish (Zimmermann et al., 1975).

In conclusion, vaccination has a good future as a tool in fish disease management and control in tilapia, and in either immersion, injectable or oral forms (or combinations thereof), will become a cornerstone for further development of the industry. 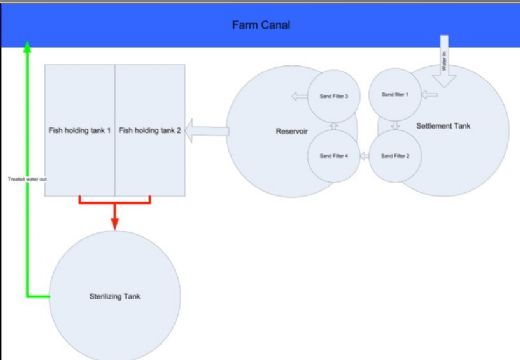 Caption:  An illustration of the holding facility and water treatment system 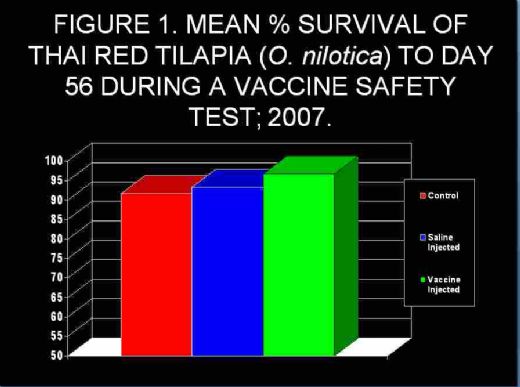 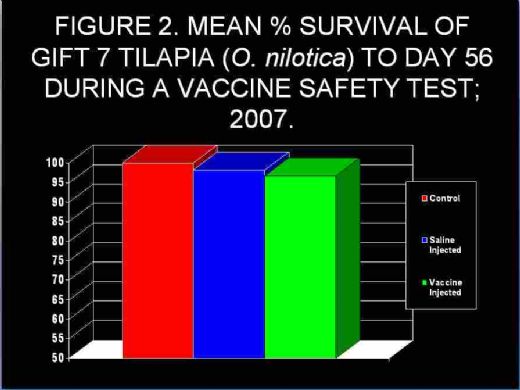 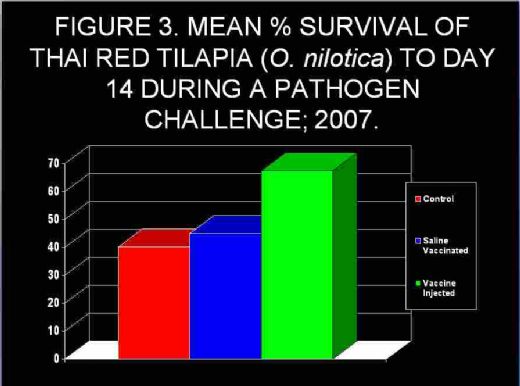 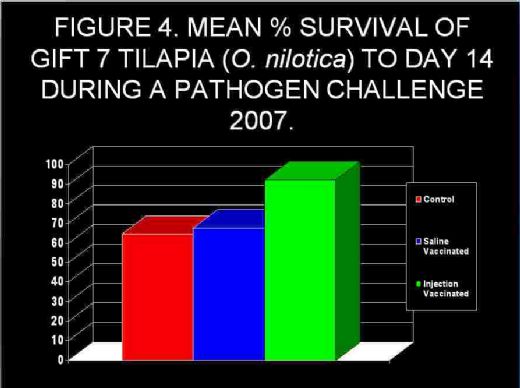 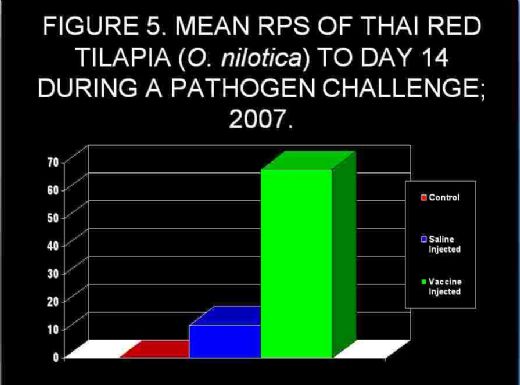 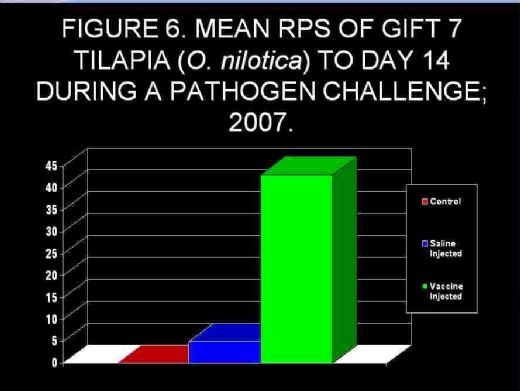 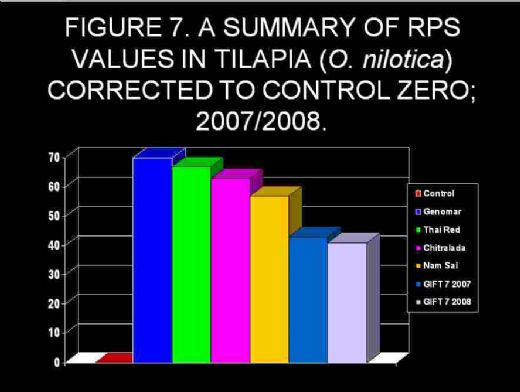