Technological advances, which focus on both cost savings in the form of reduced down time as well as optimal flexibility in terms of capacity and quality, have been in demand by the industry.

The physical quality of fish feed product can be defined by:
* Density
* Shape and size
* Uniformity
* Durability
* Water stability

The nutritional quality of fish feed can be defined as:
* Recovery of essential amino acids and specific vitamins.
* Digestibility.

On the most technologically updated extruders an optimum screw configuration can be established in order to apply the SME quantity necessary for matching a specific product, e.g. salmon or trout feed with a high content of fat/oil, internal oil or similar products with high nutritional value.

An optimum screw configuration is not always capable of applying sufficient SME to produce a given product. Frequently it is also necessary to optimise other parameters, which can be used to increase the SME supply in the extruder:

The task of producing fish feed primarily consists of combining an optimal product quality (optimum cook) with minimal production costs. Changes in screw configuration and other measures, which may contribute with higher or lower SME values, are all operations, which usually result in down time and increased production costs. Changeover procedures between ½-2 hours to adapt an extruder to a specific product are not unusual.

With the development of the FLEXTEX system (patent pending) the following advantages have been observed:

• No need for changing extruder configuration regardless of SME requirement.
• Consistent capacity of extruder.
• Reduced number of adjustment parameters during the extrusion process.
• Basically only the SME is changed (set-point).
• Less impact by die plate design.

The FLEXTEX system is based on being able to continuously control the SME applied in the extruder during operation without changing the extruder configuration or other parameters. The system adjusts the opening area in the venturi die plate, which is placed between the last screw and the die plate in the extruder. The venturi die is used in many extruders in a stationary design to decrease or increase the kneading zone in the extruder in order to control the SME applied. This is done by adjusting the size of the hole and thus the opening area and the pressure against it. The smaller the hole, the larger the pressure and thus the more energy consumption from the main motor (see fig. 2 and 3).

With the FLEXTEX system the extruder operator can determine how much specific mechanical energy (SME) the product needs. From a control system, for example a separate control or alternatively a control integrated in the extruder control, the operator can make a set-point, e.g. kW/ton (HP/ton) dry matter. By means of a hydraulically controlled piston the FLEXTEX system automatically adjusts in relation to the set-point by decreasing or increasing restriction of the venturi die by moving a piston.

The FLEXTEX system - which in principle is a dynamic venturi die - controls and adjusts the SME supply continuously during operation. In short: the change of only this one parameter means the following for the production of fish feed:

• The starch cook (up to 100%) is completely controlled during operation.
• The bulk density of the product can be reduced by up to 30% and can be controlled with an accuracy of ±5 g/l (0.3 lbs/ft3).
• Higher addition of oil and less starch in the formula without significant influence to bulk density and product quality.

The task of extruding fish feed is primarily a matter of cooking the starch, but in addition also to control the product density and thus the sinking or floating properties.

Typically the degree of starch cook varies according to the amount of carbohydrates in the formula, where 80% or higher is typical on trout feed but only approx. 70% on e.g. shrimp feed. By making a specific screw configuration of the extruder one can to a certain extent supply the specific mechanical energy (SME) necessary to produce a given product with an optimum degree of cook. The degree of cook is decisive from both a nutritional as well as a physical product quality point of view. The better starch cook, the better quality! In order to improve profitability of fish feed, formula cost must be reduced to a minimum. By improving starch cook the level of carbohydrates can be reduced, thus including additional cheaper protein sources, which all contributes to lower costs.

In principle the FLEXTEX system consists of 3 parts: 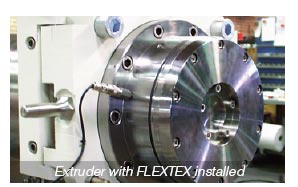 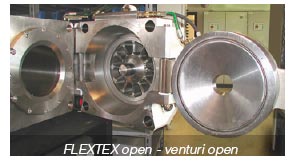 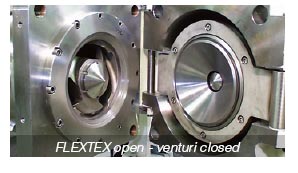 The FLEXTEX system is designed with focus on simplicity and consists of a few components only. The critical part of the system is however the piston, which - besides being used as a restriction for the meal fl ow - also distributes the meal to the die plate. When restricting the meal flow it is essential that this takes place synchronically in order not to hinder the flow ability. Changes in the meal flow will influence the visual quality of the product due to an uneven pressure at the die plate. The piston in the FLEXTEX system is moved axially and at the same time it is conical, so that the meal flow is not negatively influenced. 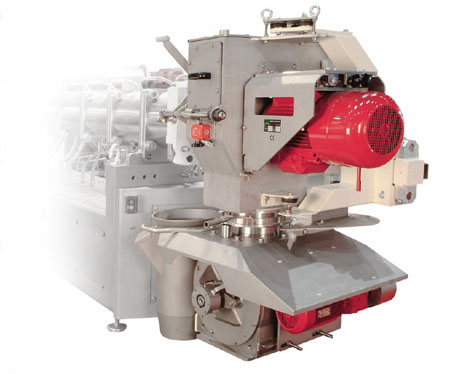 To be able to control the bulk density of products in a wide range and at the same time obtain an optimum product quality, the Density Control System (ECS) is unique. The ECS concept (patented) is based on controlling the expansion in the extruder knife house without influencing the product quality. Thus all desirable parameters can be used in the extruder without regard to expansion. Main focus is product quality! 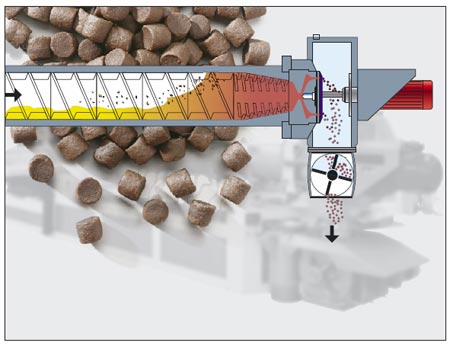 The FLEXTEX system and ECS – Combined

The FLEXTEX and the ECS systems can either be installed individually or as a combined concept. This is solely a question of each producer’s requirements in the production. Most frequently a FLEXTEX system is installed as a result of a requirement for either more starch cook, reduced formulation costs, or increased capacity.


The FLEXTEX and ECS system - Performance

Documented tests supported by experience from systems in full scale operations have shown significant opportunities for the FLEXTEX and ECS system. During a series of tests the shrimp feed formula (70% protein) illustrated below was used: 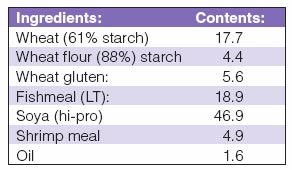 The following tests were conducted:

Test A – FLEXTEX effect on starch cook (see fig. A)
By increasing the SME in the extrusion process by approx. 12% the cook rate was increased by 11.8%.

Test B - ECS effect on bulk density (see fig. B)
The ECS can increase the bulk density by 25% by adjusting the pressure in the knife house only! 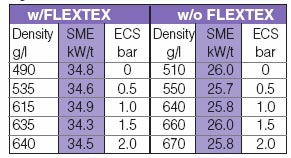 Test D – Reduced starch contents in formula by means of FLEXTEX (see fig. D)
By reducing the starch contents by approx. 50%, equal water stability (8 hours) could be obtained as with original high starch formula, but without FLEXTEX (8 hours). 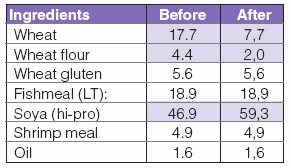 The FLEXTEX and ECS system - Summary

The FLEXTEX and ECS system provides significant flexibility in the production of feed for all fish species. By continuously controlling the SME during operation it is possible to achieve an optimal physical quality. At the same using the ECS to control the density two unique tools for controlling finish product characteristics are present.

The advantages of the system can be summarised to: