Pacu (Piaractus brachypomus), a native fish of South America recently introduced as an alien species into India via Bangladesh. A tendency has been observed among the fish breeders of Bengal to raise seeds of alien species, principally those that are carnivorous. Besides breeding individual species, the fi sh breeders are also interested in conducting hybridisation programmes between Indian major carps and exotic species, as they are largely unaware of the genetic consequences of such activities.

Pacu were probably introduced in India in 2003 or 2004, and leading hatchery owners soon started culture in captivity to raise broodstock for commercial breeding programmes. Pacu attain maturity at 3+ years in age with a stocking density of 2,000-2,500 individuals/ha. They are normally stocked at the ratio of 1 pacu : 3 Indian major carps when polyculture is undertaken. 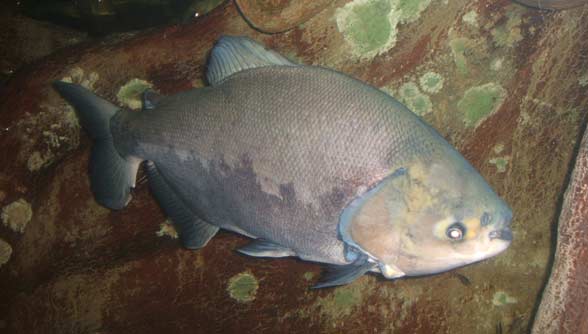 Some farmers reported that polyculture gives better results than monoculture. During brood stock management the fi sh are fed with oil cake, boiled rice and grains, peas and fi shmeal at 5% of total biomass per day. Compared to other food ingredients, fi shmeal and groundnut oil cake offer better growth and maturation. One to two days before breeding is intended to take place, feeding is stopped. Mature male and female fi shes are induced with pituitary extract.

The eggs are stripped out in trays and the milt and eggs mixed with a feather and the addition of water. The ratio of males : females for stripping is usually 1:1 or 1.5:1 depending on the maturity and density of the milt.

Environmental factors play an important role with regards to both the dose of inducing hormone required and stripping. When temperature is greater, i.e. 34-35°C, then both the dose requirement and stripping time is less. Again, for better fertilisation a congenial environment is needed. The fertilised eggs are transferred successfully into two hatching jars in 48 hours and in between the hatchlings are kept in hapa. As the yolk is absorbed the hatchlings become longer. From the 3rd day onwards the hatchlings are ready for sale.

For nursery management the spawn or hatchlings are stocked in the nursery pond, prepared beforehand, at the rate of 150,000 individuals/ha. The span are fed with artifi cially prepared feed made from groundnut oil cake, rice polish, soybean dust and also on zooplankton. Generally 2 kg of Induced breeding of pacu (Piaractus brachypomus) in captivity with pituitary extract Chattarjee, N.R. & Mazumdar, B. Department of Aquaculture, Faculty of

Fishery Sciences, West Bengal University of Animal and Fishery Sciences, 5 B.H. Road, P.O. Panchasayar, Kolkata – 700 094, West Bengal, India feed/ha is given daily at this stocking rate. Within 8-10 days the spawn develop into fry, which are transferred to rearing ponds. A 3 ha pond is ideal for rearing and stocking density is usually around 100,000 individuals/ha. The fry are fed with artificial food at the rate of 5 kg/ha per day made from groundnut oil cake, sunfl ower oil cake and fi sh meal, and also with boiled rice and Canadian peas.

Pacu was probably introduced into the farming sector of Bengal no more than fi ve years ago. At this stage two to three leading farmers have already standardised the captive breeding and culture techniques for this fish. At the fi ngerling stage, the fish possess an alluring shining colour with a tint of blood red around the ventro-anterior region of the trunk. At maturity, the colour becomes more subdued with some round spots appearing throughout the body.

The overall colour is dark in nature with a shape similar to that of a pomfret.

A great demand for spawn and fry from Midnapore and 24 Parganas (south) districts of the state. Demand is greater from Chennai, Kerala and Andhra Pradesh. The fish seed cultivators of these regions also supply mature fi sh to

Bihar, Uttar Pradesh, Bangladesh and Pakistan where people are very much fond of this fi sh, as it possesses a lot of meet with less spines. The characteristic pomfret-like shape is considered an attractive quality amongst consumers.

Pacu have already established a place in the farming sector of Bengal and a good number of freshwater hatcheries are likely to be converted into Pacu hatcheries in the near future.